Though a band since 2001, Avatar, hailing from the hallowed grounds (to metalheads, at least) of Gothenburg, Sweden, didn’t reach North America until the 2012 release of “Black Waltz,” its first effort for eOne Music and an album that saw the band boldly carving a distinct identity both musically and visually. The following year, spurred on by hit singles including “Smells Like a Freakshow,” Avatar toured North America for the first time, supporting Sevendust and Lacuna Coil, and headlining dates of its own. In 2014, Avatar is set to break out even further with the release of its fifth album, a spring tour here with Pop Evil and Escape the Fate, and appearances at high-profile festivals, including Rock on the Range and, in the U.K., Download. While on a promotional trip to New York City, frontman Johannes Eckerström called in to Live Metal’s Greg Maki to discuss the new album, the band’s evolution and more.

LIVE METAL: Well, the new Avatar album is done and will be out this year. What can you tell me about it? Do you have a title and release date in sight?

JOHANNES ECKERSTRÖM: It’s “Hail the Apocalypse,” and it’s coming out on May 13. We did it this fall. We actually went to Thailand to record it this time. We secluded ourselves in the Thai, isolated countryside and jammed this one out live. It was very cool. It was a last-minute decision. We sat on the plane down there, enjoying the complimentary beers, and watched this documentary that Dave Grohl put out about Sound City Studios. We had kind of talked about it before and thought it would be cool to do it live. Do we dare to? Do we want to (do it) semi-live? After watching that documentary—everyone is on that documentary, it feels like, and they are all talking about this. We felt challenged to challenge ourselves with it. So yeah, we decided to go all in with it, just push the record button, turn up the click track and let the songs turn way more organic and real than it would have been otherwise. I think it’s the best decision we could’ve done for the album. It has a completely different energy than anything we’ve done before.

On the previous album, “Black Waltz,” you made some changes musically and especially visually. Is the new album building off of that?

Yeah, it’s totally doing that. What happened with “Black Waltz” is that we started from the musical end, and then we finally found a real path for ourselves musically, where we felt we finally, for real, put our ideas and influences and our vision together in a way that was truly and only us, that now people have a harder to time to label us as a genre but still love what we do. And then, because of that, everything just followed because we wanted to make something that made sense the whole way through, where everything communicated the same stuff, and the visuals fed off what the music and the lyrics were doing. And now we’re set on this path where it’s just about keeping up on exploring how far we can take ourselves creative-wise now.

Are you still using the clown character you created for the last album?

Oh yes. He’s not leaving me ever, I think. We have become quite good friends.

Has that character had an impact on your songwriting at all?

Well, everything has been feeding off each other basically. It started just as this little idea because we had this song—the title track, “Black Waltz”—that we just got this opportunity to work with these freak show people, Bryce Graves and people from his group, Hellzapoppin. It just was something (like), “OK, what can we do that makes sense to the song? And what can I do in the video to make sense with what’s happening around? Scary clowns are pretty awesome.” And we did that then, and everything just clicked. It’s very hard for me to put words on it. It’s as if the clown had waited for me all these years and waited for us. So that became a part of it with “Black Waltz,” and because we found this vibe and this constant lightning in bottles, it has been running along with us since then. So it’s this freaky circus world, this filter that we use to look at the world with.

How do you feel it’s affected you as a live performer?

We always had the intent to do just as great visual shows as musically, and that is something that the clown gave to us. So it affects us a lot. Again, it’s this circle of stuff feeding off each other because, also, when we write anyway, we write for the intent, of course, to record it but, more than anything, to perform it for people live. The performance of Avatar is so much more than just playing the songs from beginning to end and just standing there. We want to do more than that.

With “Black Waltz” being so successful for you—you came and toured in America for the first time—did you feel like there was extra pressure on this new album when you were recording it?

No one in the world could put more pressure on us than we do ourselves and I’ve always done. We always have this urge to outdo ourselves, to do even better next time and to—I don’t know—make our older stuff simply look bad in comparison. Actually, I didn’t really, personally, feel that kind of pressure, like, “OK, this went well, so the next one better not suck.” Well, it wasn’t supposed to suck anyway. So for me, it’s been pretty much the same, which is, in part, going through hell.

What do you mean by that, going through hell?

It’s just that we have a very interesting way of working, where it’s about finding the balance between individual creativity and group creativity and that journey, that back and forth, and that struggle to make everything work. It’s really, really hard to make really great songs. It takes some time. Sometimes you suffer through it. You do it for those moments of bliss that you get along the way and the rush of when you finally get something right and the creative tap is just open and flowing. And then sometimes you get stuck, and you start to doubt yourself a lot and you start to doubt the others, and there are communication breakdowns. It’s a whole lifetime in itself, the production cycle of an album.

How long did you spend in the studio on this one?

Oh, a little less than a month in total because we gave ourselves—I don’t know—two days off. (laughs) We were in Thailand, and we recorded in two locations. All the basics, all the meat parts of the stuff that was recorded live, was done in a studio called Karma Studios somewhere in the countryside. And then for the final touches—solos and vocals and all that—we went to our producer Tobias (Lindell)’s house he’s renting there. But in the first place, we spent about—except for sleeping and eating—we spent a total of 15 minutes outside of the doors of the studio. So that was very, very intense. But it’s a good thing. You turn into this weird cult, secluded from the world, and you just get so focused on what you’re doing. No one really felt the urge to do anything else anyway. It was the first time for most of us to be in Asia, but we just didn’t care. We were there to do an album.

I already brought up last year coming to America for the first time to tour. What was your experience like over here?

That was really amazing. We didn’t know what to expect. We’ve been on those tours at home where you’re building slowly from the bottom up and you pay your dues for quite a while, and here I feel we got a real jump start. We started a couple levels higher than we expected—big venues, and on the part of the tour that was us opening for Sevendust and Lacuna Coil, people showed in time for the openers. So there were full houses everywhere, and that just overwhelmed us, that response overwhelmed us. It’s been an uttermost pleasant experience to be here, and it’s bound to happen very, very soon. I’m looking forward to doing it again.

Was making it in America a goal that the band had or did it just come about as you continued to build?

It’s a bit of both, because all in all, when you’re in a band, you want to conquer the whole world. We were just in a stage where we didn’t necessarily see at the time how it would happen. Then this deal with eOne came about in a slightly unexpected way. We always felt we would have loved to come here and play and release our stuff even earlier, but it was just we didn’t have any doors or openings for so many years. So we had learned to live without it, and when it finally happened, we of course got excited about it. It’s another continent to conquer.

Where you come from in Sweden, that area is known for a pretty specific kind of metal. Do feel like even though you’re not in that category, you tend to get lumped in there with those other bands?

I feel like we, in the past, got lumped into it—during a certain period, more deservingly than we cared to admit, and later, wrongfully so. But now we really feel like we’re standing on our own legs and that we are being recognized for that. It used to bother us in the past, because we were in denial about how much living in Gothenburg, the Gothenburg sound and all these groups—in our case, especially The Haunted—did shape us as musicians. As kids, when all these great bands come from the area you live in, of course you take influence from it in one way or another. So it did affect us, but like I said, nowadays we stand so much more on our own legs sound-wise and the way we piece our influences together into something different.

I know some people still call us melodic death metal, and that’s fine by me. We’ve got melodies, we scream and it’s metal. Personally, I’m a huge death metal fan, and I feel that we’re doing something else. I feel like, to me, we are not a death metal band per se and not what I automatically associate the words “melodic death metal” with. Our roots are in extreme, and it’s something, I guess, in many cases very Swedish, very European. But then it’s mixed with so many things. For instance, from this continent, we picked up a whole lot of inspiration for making stuff groovy. I think it’s somewhere between all these influences where the answer lies that we have been able to put out our own little niche out there.

We talked about it a little before, but for people who haven’t seen Avatar live, what can they expect?

We are a visual band just as much as a musical band. We strive to make everything fit together and communicate the same things. It should be a very, very full and rich experience. How do I put it? It’s merciless. And depending on how much stuff we can afford to bring over, it may or may not explode a bit.

Is there anything else you would like to add?

Just for people to keep their eyes open for our upcoming music video for “Hail the Apocalypse” on Monday (March 17). It’s good to be here in the States again. Tour announcements are coming up, as well. I look forward to seeing all the American fans again. 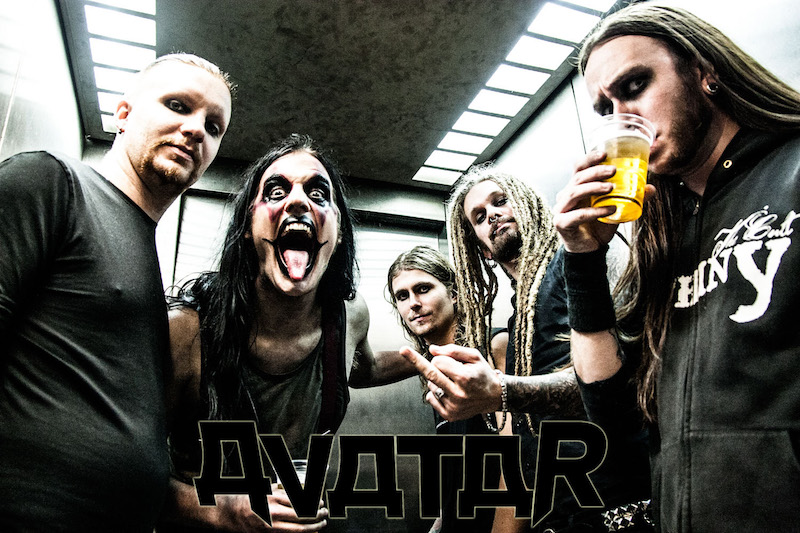