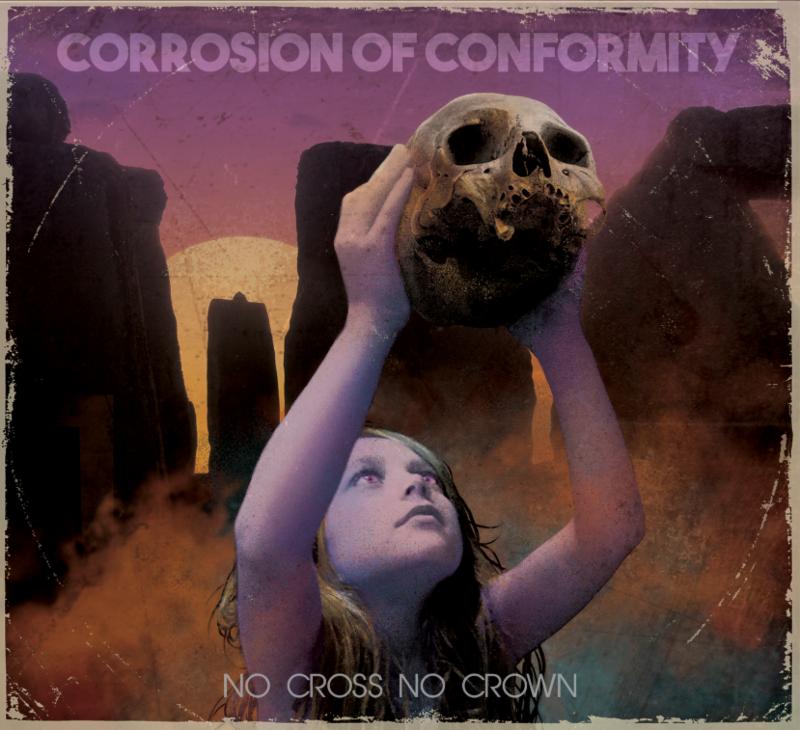 Whenever Corrosion of Conformity releases a new album, folks take notice. But their latest is a true event. It’s been a dozen years since Corrosion of Conformity recorded new material with vocalist/guitarist Pepper Keenan at the helm. In that time, there have been rumors, whispers, and outright allegations that the legendary Southern rock outfit would reunite to blow the doors off the whole damn scene again. In 2014, after nearly a straight decade traversing the globe as a guitarist with New Orleans supergroup Down, Keenan reconnected with the core Corrosion of Conformity trio of Woody Weatherman, Mike Dean, and Reed Mullin to hit the road hard. “Reed called me and mentioned maybe playing a couple shows,” Keenan recalls. “I said, ‘Let’s just go to Europe and see if it works.’ So we went to Europe and then ended up going back four times in one year… We toured for a year and then started tracking about ten or eleven months ago.”

And now, the long wait is over. Corrosion of Conformity returns with “No Cross No Crown,” an album that somehow sounds as though no time has passed between 2005’s “In The Arms Of God” and today. Check out the first taste of the album with “Cast the First Stone” inside!

Recording in North Carolina with longtime producer John Custer, Corrosion of Conformity cut “No Cross No Crown” in about forty days over the course of a year. “We took our time and didn’t put any pressure on ourselves,” Keenan says. “I’d go up from New Orleans and we’d do four or five days at a time, just hacking away at it. It was fun because we did it like a demo, but in a studio. We were writing and putting it on tape at the same time. We took what parts we thought were great from the old days and weren’t scared to go backwards. It kinda wrote itself that way.”

Some of these new jams sound like could’ve easily been on “Wiseblood” or “Deliverance,” two of the band’s most revered records. On “No Cross No Crown,” beefy Southern stompers like “The Luddite,” “Little Man,” and “Forgive Me” are interspersed with melancholy guitar interludes like “No Cross,” “Matre’s Diem,” and “Sacred Isolation” — just like Sabbath used to do in the ’70s. “We started doing that on Deliverance,” Keenan points out. “My theory on that is that if you’re trying to make a record flow, you need to break it up a little. When you need a breather, write an interlude. I like writing those mellow pieces just to space things out and make the next thing come in heavier.”

The album’s iconic title comes from a recent tour stop in England. “We were playing this old church from like the 1500s that had been turned into a performing arts center,” Keenan recalls. “The dressing room had stained glass windows and one of them showed this poor fella being persecuted. Underneath it said, ‘no cross no crown.’ So I just took that idea. We’re not trying to be on a soapbox, but we used it as a catalyst to write songs around.”

Which is to say that “No Cross No Crown” has a lot less to do with politics or religion than its title implies. “I think everyone needs to get away from that mindset in general,” Keenan offers. “It just seems to be a mess out there nowadays. We need to get back to being humans and taking care of each other and simple things like that. For us, the terminology ‘no cross no crown’ is a theme. It’s mentioned in like three songs throughout the album. We just weaved it through as we went.”

“No Cross No Crown” will be released via Nuclear Blast Entertainment worldwide on January 12th, 2018 on CD, digital, vinyl, and cassette formats. Various preorder bundles are currently available at THIS LOCATION.

In advance of the release of “No Cross No Crown,” Corrosion of Conformity will join Black Label Society for a mammoth North American live takeover. The tour begins December 27th, 2017 in Denver, Colorado and will wind its way through nearly four dozen cities, the journey coming to a close February 27th, 2018. Additional support will be provided by Eyehategod and Red Fang on select shows. See all confirmed dates below.