John 5 and the Creatures are set to release a live album, “It’s Alive!,” on Thursday, Jan. 25, 2018. It will be the world-renowned guitarist’s first album to be featured on vinyl. A 24-page, full-color tour book covering the John 5 and the Creatures’ tour journeys so faralso will be available for separate purchase.

Pre-orders are available now at www.john-5.com/store, with more options coming soon. Fans can check back to www.john-5.com for updates. 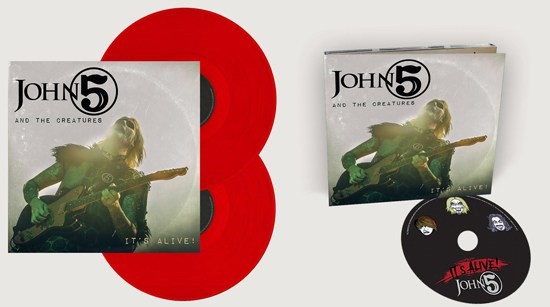 “I remember pulling up to a beautiful venue that we played in Sellersville, Pennsylvania, and before we were unloading the equipment, the soundman said, ‘Hey guys, would you like to record the show?’ We said, ‘sure that would be amazing!’ John 5 said. “I always wanted to have a really great recording of the show. We were a few weeks into the show so we were really well rehearsed, so I said, ‘Alright guys, let’s not jump around. Let’s just really try to get a great performance because we only have one shot—no other shows if we mess up!’ So we explained to the crowd that we would be recording. You can hear that on the recording of the album, which makes it very magical. It came out amazingly! That’s the magic of live albums to me—capturing the performance.”

“I’m so proud of it that I wanted to put it out and also tour it like bands used to tour live albums back in the ’70s,” John 5 said. “I thought that was so cool! I’ve put out a lot of records, so I thought—goddammit, I’m going to do it!”

John 5 and the Creatures will begin an extensive tour of the United States in February for a first leg and will pick back up in late March for a second. The tour will start Feb. 1 in Orlando, Florida, and come to an end April 21 in Tacoma, Washington. Tickets will become available very soon, and VIP packages will be available exclusively at www.john-5.com/store. See below for a full listing of dates.

Many songs that will be heard on tour and on “It’s Alive!” can be found in their original form via the latest John 5 and the Creatures’ studio album, “Season of the Witch.” The album can be ordered via iTunes, Amazon and John-5.com, or streamed via Spotify. The album showcases experimentation with various genres—including western swing, Spanish flamenco and metal— thoroughly showcasing JOHN 5’s diverse virtuosic abilities.

LIVE METAL BEST OF 2019 Jeff Maki (Founder) Exact order TBD. Overkill “The Wings of War” We “felt the fire” when New Jersey thrashers, Overkill “took over” and had us all “Under the Influence” back in the early ’80s. Throughout the ’90s and “The Years of Decay,” not even the band itself could look into its “Horrorscope” and see itself becoming “Immortalis” all the way through to “The Electric Age.” But “The Grinding Wheel” kept thrashing all the way to present day, now prepared to ride on “The Wings of War.” ‘Nuff said. @overkillofficial overkillofficial #overkill #thrashmetal #thrash #bestof2019 #heavymetal #metal #livemetal