Three years after reuniting with vocalist/guitarist Pepper Keenan, Corrosion of Conformity is back with “No Cross No Crown,” its first record as quartet since 2005’s “In the Arms of God” and 10th album overall. Released via Nuclear Blast, the new record debuted at number 67 in the United States on the Billboard Top 200, number 12 on Billboard’s Top Current Albums and number 3 on the Top Hard Music Albums chart, making it the highest charting album of the group’s career. Not bad for a metal band that’s existed in various incarnations for more than 35 years. When COC’s tour supporting Black Label Society came to the Fillmore in Silver Spring, Maryland, Live Metal’s Greg Maki sat down with bassist Mike Dean to talk about “No Cross No Crown,” the impending retirement of Slayer and more.

LIVE METAL: Before we get to all the new stuff that’s going on right now, I’ve always thought COC has one of the best and most recognizable logos in music. Who came up with that?

MIKE DEAN: I think looking at some of the things of the time—we were like a high school hardcore band, back in the day of real hardcore bands. And you look at the Motorhead thing, the Crimson Ghost skull of the Misfits and things like that. I think I had the idea of what about the fallout symbol on the face of a skull. I can’t really draw or render it, so a friend of ours, who’s kind of a bigtime tattoo artist now, a guy named Errol Engelbrecht—we mentioned that to him, and he did it and kinda added the sort of goofy thing where the spike in the center almost made an inverted cross there. He was good at spiky, skull type of things. Yeah, he knocked it out of the park, and it’s pretty iconic. Sold a few T-shirts over the years–some of them we even sold. (laughs)

So the new album, “No Cross No Crown,” came out a couple weeks ago, and it had some of the highest chart positions of your career. What do you think that says about the album and the band?

It definitely says there was anticipation for it. I’d like to see the chart this week–not ‘cause I’m obsessed with that; I’m just curious. I think for metal bands that have been around for a while, that are somewhat vital, you have a lot of anticipation, a lot of fans, people that anticipated that—”Oh, so and so has a new record.” And so they’re gonna mark their calendar, and they’re gonna go get it. So there’s a big push, and those kind of records will chart that week, but then you gotta see, is that all there is? Yeah, I think there was a lot of anticipation that we got back with Pepper and we were doing new material, because we’d done a few shows. We ended up doing a lot of shows before we actually got serious about recording it, and we did pretty well and pulled it off, so that added to the excitement.

What effect did all that touring have? Could you have made this album before doing that?

Yeah, I think we could’ve, but it kind of got us into game shape. We wanted to do a little bit of it just to make sure we had the chemistry and everything was clicking and it was gonna work. You can tell that in, like, three shows—you can tell that in half a set or whatever. But we just kept getting offers to play, and the rent’s due every month, so suddenly it was almost two years before we got to work on the record. 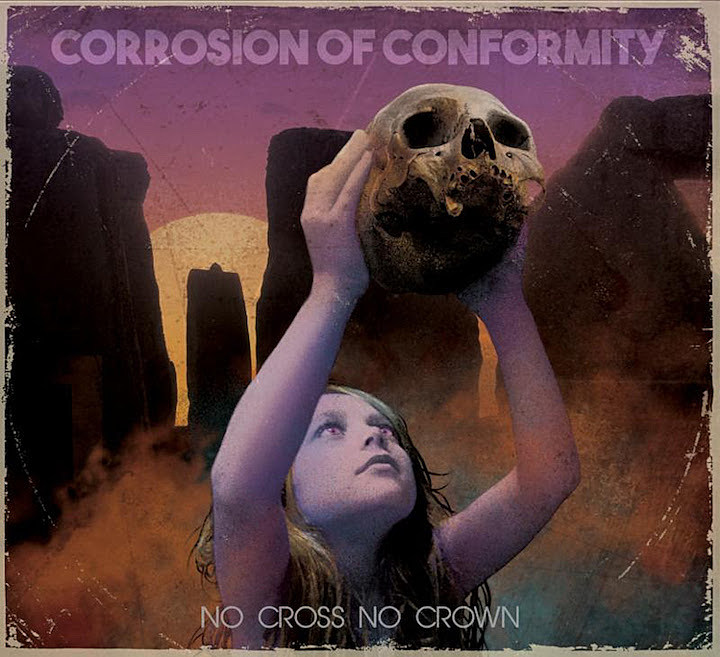 What was the writing and recording like? Because you all don’t live in the same city.

No. The three of us that live close to Raleigh, North Carolina, would get together and work on stuff. But Pepper’s the guy coming back that’s gonna sing most of the stuff, so you gotta kinda see what he has to offer and work around that. He brought a lot of ideas, and we threw all of our ideas together, and sort of tried some combinations, some little provisional arrangements. Once that happened, we would get him up to Raleigh, maybe four or five days every month, and just work around the clock, 16-hour days. Mostly having one guitar player and the drummer run down the songs. Sometimes we’d do the whole band. And just do it over and over until we had an arrangement and nailed it. It’s just pretty exciting when you can actually be rolling tape—and most of the time we were literally rolling analog tape; sometimes we’d do it right to the computer if it was really, like, a very new arrangement. The first time we did it right, we captured it there. So there’s a certain freshness to that and a certain excitement.

It seems to me like you used “Deliverance”/“Wiseblood” as a jumping-off point but with a heavier feel.

Yeah. I’d say maybe more “In the Arms of God.” There’s things that you could compare to all those records, but the idea was just to do some new COC stuff that was identifiably COC, but you could also say was new and some type of fresh ideas. I thought stuff like “The Luddite” and “A Quest to Believe,” stuff like that, had some novel approaches for us. “The Luddite” was the last song written, last song recorded and then the first song on the record. It just had an energy about it, so I thought it was pretty good. But there’s some familiar and some unfamiliar things. I’m pleased with the result. We knew we were doing something good. We felt it, but none of us had really the perspective on it when you’re doing it. You gotta kinda let it cool off for a minute and, yeah, get some perspective after you get away from it. But we’re pleased with how it turned out.

You cover a Queen song (“Son and Daughter”) on the album, which I don’t think a lot of people saw coming. How did that come about?

Well, we’ve always been into Queen. When I was a kid, that song “Dragon Attack” was pretty rad, and then I just became advised that Testament had covered it and had to check that out, and that was pretty cool. Just always loved Queen, and John Custer, the guy that’s produced every Corrosion of Conformity record since “Blind” in 1991, is a huge Queen fan. He’s like, “There’s this one song on the first Queen record that sounds like a riff you guys would come up with. It’s kind of funny.” He’s like, “‘Son and Daughter.’” I’m like, “Is that the one with  that”—I didn’t remember the riff; I just remember the extreme falsetto shrieking. He dug up a live version on YouTube, and we were like, “Yeah, we could get behind that.” So we had to learn it, and we had to try to figure out a way to make it our own, but it was pretty natural. There was people that weren’t aware that it was–on the advance copy–they weren’t aware it was a Queen cover, and they described it as reminding them of Queen. So that’s good.

So how’s this tour going so far, out with Black Label Society?

You know, didn’t know what to expect, but I think there’s a lot of people that come to see Black Label that aren’t familiar with our band but who enjoy the show. That’s what you’re supposed to get out of supporting another band on their tour. That works. That’s outreach. So that’s really working for us. Everybody’s real friendly, and every day is a pretty good day.

You guys have such a big body of work at this point, so is it hard to put together a set list for a supporting slot?

It can be hard, yeah. There was a while where it was like a fight, ‘cause it’s like, “Really? We gotta do that!” Even for a headlining set, you gotta pare it down within reason.

How many new songs are you playing?

Really, right now, just one in the set and a couple on deck. We definitely play “The Luddite.” We could probably break out “Little Man” or probably break out “Wolf Named Crow” without too much more work. Some of the other stuff, we have to get some serious rehearsal time, because really, the only time we played that stuff was when we recorded it. There wasn’t that much preparation in terms of rehearsals. A lot of the stuff, we’re kind of at that point where—it’s happened with a lot of our records—we’re kind of stretching out a lot, and we have to learn all that off-the-cuff stuff we came up with in the studio.

This tour goes for about another month or so. What’s next after that?

We’re gonna do a bunch of festivals in Europe, and we may do some more Black Label Society. Since our record was number 98 in Australia, I’m hoping we can go to Australia, ‘cause I always enjoy going to Australia.

I don’t know if this is something you want to say anything about, but how is (drummer) Reed (Mullin) doing health-wise?

Uh, I can’t really speak to that. He’s gotta get his knee replaced. He’s kind of banged up, so you’re gonna see our drum tech play the set tonight, and he kills it. Reed was out here doing well, but the whole knee thing is hard to deal with.

So the news came out that Slayer is hanging it up.

You guys have been around as long them, and you’re still out there doing it.

I think what we do lends itself to being old bastards a little more than what they do. ‘Cause what they do, while there’s a lot of finesse and they’re the best at what they do, it’s complete brutality, and possibly, when you’re 50 years old, you might want to branch out and explore something else or whatever. It’s probably been hard to lose (guitarist Jeff) Hanneman, who was my favorite member of Slayer, and having Gene Hoglan fill in or whoever playing drums is great, but—come on, (former drummer Dave) Lombardo?—it’s not quite the same. I don’t think they’ve ever made a bad record. I suspect that it’s all a gimmick and they’ll be back. I did like the press release, that they’re declaring victory and going home. I thought that was good. But yeah, that’s kind of freaky. Those are the people that helped us get signed to Metal Blade Records all that time ago.

Yeah, I talked to Reed a couple years ago, and he told me that story.

Yeah. So it’s kind of weird. You get to this point in life, and certain people drop dead. Slayer is retiring. The original lineup of Motorhead that you knew when you were a kid are all fucking dead. It’s like, “Oh, OK, this is what this is like, grown-up life shit.” I don’t think we have any plans to do so. We’re kind of feeling it as a creative thing with the last record. I think as long as that desire is there, it’s not really gonna happen. I do admire somebody making a call like that. If they think it’s time to do that, they don’t just trudge on ‘cause it’s a paycheck or whatever; they make a call. They declare victory and go home. (laughs) I just fully respect that so much. But I think it’s bullshit and that they’ll be back. (laughs)