We’ve been writing that the last few years have been a celebration of Max Cavalera and his incredible career in metal, first with the mighty Sepultura and now with the Soulfly tribe. With the release of “Ritual” (read review) last year, Soulfly now has 11 studio albums on its own. It’s truly unbelievable.

Below, in what is becoming a regular column here, Live Metal’s Jeff Maki caught up once again with the iconic guitarist, vocalist and ambassador of metal, Max Cavalera. The discussion covers “Ritual,” touring and all things Soulfly. Plus, did anyone know Max is in the Rock and Roll Hall of Fame? I didn’t. And is rock really “dead?” Max has the best answer we’ve heard yet.

LIVE METAL: So even though this goes back a couple of years, many fans might not know that you have some items in the Rock and Roll Hall of Fame. So could you take us back to 2016 when this came about?

MAX CAVALERA: Yeah, it was cool and kinda came out of nowhere. (The Rock and Roll Hall of Fame) contacted (Max’s wife and manager, Gloria Cavalera), and they were really big fans of the work and Sepultura, and they asked if we had anything rare. And it so happens that we did. Gloria had where I wrote the name “Sepultura” for the first time ever and the original lyrics in Portuguese. (This is when) it was like with different band members. It was just me and Iggor (Cavalera) as the only original guys.

So that book was sent to them and they loved it ,and it’s displayed in the Rock and Roll Hall of Fame. It’s there right now. It’s cool, and I’ve been there twice already and saw it. It’s right by a bunch of Rob Halford stuff and a Dimebag guitar and other awesome rock star things (laughs).

Yeah, I wouldn’t think that there would be many things (represented) by metal in the Rock and Roll Hall of Fame, so that’s really cool. That leads me into my next question: Do you feel that the legacy of Sepultura and all those great albums overshadows the albums that you’ve done since with Soulfly or other projects? Do you see it as such, and how do you deal with it if so?

I just deal with it the best way I can. It was a different time, so everything was different. But I’ve always been a hard-working guy, and I always love to write and make records and tour. So as far as that goes, I just never stopped. In terms of comparing which one is better, I am not interested. I think what’s most important is your passion, and if your passion is there on the songs and the albums that you’re making, then you’re OK. Then everything else takes care of itself.

Not all the records are great, but that’s kind of an impossible task to have every record you do be great. But overall, I’m pretty happy, and I’ve wrote some tunes that people like and enjoy. And even beyond that, it’s helped a lot of people who are going through some hard times, which is kind of like my favorite thing about Soulfly—the positivity and the effect it had on people. (And this) was beyond what I had done in Sepultura. Sepultura was more of an aggressive thing, and Soulfly is more inspirational and more positive. And the effect it has on people is amazing, so that’s really cool. When I talk to people and they tell me some real hardcore stories, like when they’re going through cancer and listening to my music while going through chemotherapy—fuck, that’s heavy.

Those things keep me motivated more than success itself, because to me, that is success when you are able to do something for somebody in their life through music. That is the definition of success to me more than anything else.

Overall, I wouldn’t change it. It wasn’t the way I planned, but I went on with it and did the best I could with what I had to deal with it.

Yeah, I think you made out great and a lot of people do, obviously.

Like I said, you can’t really plan life. It just doesn’t work like that. You can try, but a lot of times, life throws a curveball at you and things happen. But overall, I’m very pleased with everything, especially nowadays in this day and age. I get to jam with my son, having (drummer) Zyon (Cavalera) in the band. It’s great, and he’s becoming a great drummer. I’m enjoying touring and enjoying metal in general, as much and probably more than ever before. I’m more of a metalhead now than I’ve ever been, which is ridiculous. (laughs) You know, I should grow up at some point, but I don’t want to. (laughs)

You’re like an ambassador for metal, so that leads me to my next question. What would you have to say about all of this “rock is dead” talk? Is rock dead?

Well, if rock is dead, then they haven’t been to Poland, because we were (there) last year and there were 700,000 people at this show (Pol’and’ Rock Festival 2018). It was a festival, and it was my birthday, actually, too. It was a three-day Polish rock festival where Gojira played and Judas Priest played. It was fucking insane, man. So NO WAY, rock is not dead.

Maybe it becomes more popular or less popular. And I think metal really isn’t supposed to be mainstream. I kind of like it underground. We play small venues, and that’s where it’s at. That’s where the energy is at. So I think those things are the same as they always were 20 or 30 years ago. Those small venues are great to go there and really feel the band. And then we do the big festivals in Europe and like in Poland, which just shows you that rock is definitely not dead.

But you know, I’m an optimistic kind of guy. I like to think the best is yet to come, and I want to keep working and writing and keep making good, powerful records. My goals are pretty simple, actually. I don’t really have any obsessions with rock star dreams at all. I don’t dream the things that rock stars dream, and I don’t care for those things. I care about being alive, being healthy, being with the family and being with the fans. If I can have those things, I’m good

Speaking of good, powerful records, last time we spoke “Ritual” was due out, so now that it’s been out for several months, are you completely satisfied with the record and the response? And now looking back, where do you see this record sitting in Soulfly’s discography?

I think the tour will determine how special this record will be. As far as the reaction, it’s already been amazing from fans, and even people on other bands have heard it and they loved it. I was very happy, but there’s a couple of things I would do a little bit different in some songs. But overall, I think we hit it pretty good. I think it’s a really honest, true and true to the form Soulfly record. Everything (is here) that is Soulfly: the tribal, the groove, the thrash, the death metal and aggression, and more rock ‘n’ roll stuff on “Feedback” and saxophone on “Soulfly XI.” So I wouldn’t change a thing ,but I think when we start touring for the record, we’ll see the songs really come to life. Especially stuff like “Ritual,” “Dead Behind the Eyes,” “Under Rapture,” “The Summoning.” I think a lot of people are really going to like the stuff live. I’ve already been jamming them with Zyon, and I feel the energy.

And I think in the end, when you look at, (whether) we’re talking 10 years, 20 years from now, this will be looked at as a really important Soulfly record that was done at the right time. Because (when you’re) making your 11th record, it’s kind of hard to keep it fresh and exciting. A lot of bands just lose it or they just don’t care. But that’s not the case (here). We put extreme care into this record and worked really hard with Josh (Wilbur), the producer, and tried to make the best record we could make. It was 20 years since the (first Soulfly), so it was kind of a celebratory date.

OK Max, well I want to tell you that “Ritual” was in my best albums of 2018, and it really plays out like a “best-of Soulfly,” except with new material.

Yeah, that’s so right. We really have a good group of guys who are on top of their musicianship. Marc (Rizzo) is an amazing guitar player, Mike (Leon) is an awesome bass player, Zyon is killing on drums right now, and I’m still inspired by my riffs and the music I listen to all around. All that together, we took to the studio and really went hard on it to make this the most special Soulfly record we could make. And specifically, I think it hits hard with the real Soulfly fans, the ones that wanted a bit of a return to the groove and some of the tribal sounds. I think they wanted it, I wanted it, and it was kind of cool because I missed a little bit of that. So it was the right record to make for the right reasons, and everything about it came out cool. 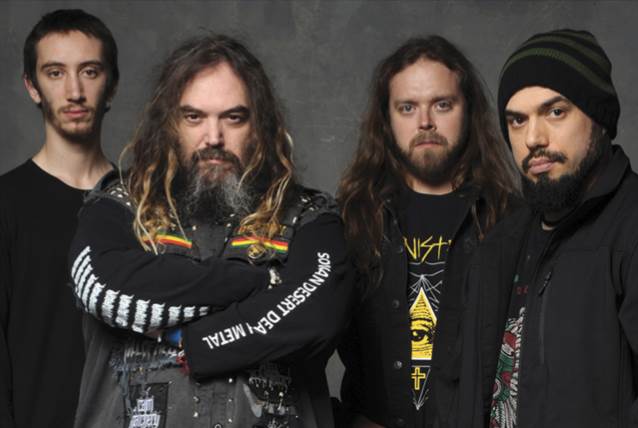