Sevendust’s set list on this night was more notable for what it didn’t include than for what it did. The band ostensibly is on the road supporting its 12th studio album, “All I See Is War,” released last year, yet the set featured only one song from that record—the single “Dirty.” It was an odd choice considering the giant “All I See Is War” backdrop on the stage, but I’m not complaining. Assembling a 90-minute set list from 22 years worth of recorded music can’t be easy.

The crowd, which was a little light during the first three opening acts, had filled most of the venue by the time Sevendust took the stage at 9:30 p.m. and kicked off the show the way it has started hundreds of performances throughout its career—with “Black,” the first song from its first album. From there, the energy and enthusiasm of both band and audience never wavered, one feeding off the other in a continuous loop.

All smiles and playing to everyone in the room, whether they were on the barricade or the highest balcony, the five members of Sevendust—vocalist Lajon Witherspoon, guitarists Clint Lowery and John Connolly, drummer Morgan Rose and bassist Vinnie Hornsby—are among the most personable musicians I’ve ever encountered. Their constant, obvious joy makes me think they would be down on the floor, in the thick of the pit, if they weren’t the ones on stage.

This year, Sevendust is celebrating the 20th anniversary of its second album, “Home,” with a handful of performances of the record in its entirety. While we weren’t lucky enough to get that in Baltimore, the band did throw in a pair of rarely played tracks from the album—”Reconnect” and “Feel So”—which only made me want to see the full “Home” performance even more. Also from the wayback machine—”Enemy,” ”Trust” and “Splinter,” which I hadn’t seen live since 2010, 2011 and 2013, respectively. 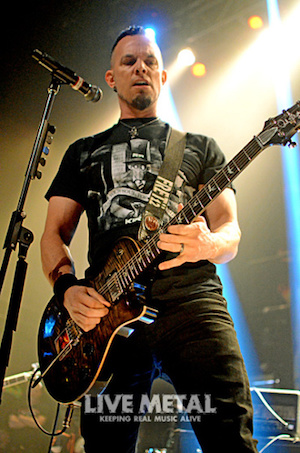 Direct support came from Tremonti, the band led, of course, by Mark Tremonti of Alter Bridge and Creed fame. The combination of speed metal riffs and melodic vocals is something of a rarity today, and as evidenced by the long line of fans for the post-set meet-and-greet, the band is carving out a growing niche for itself.

The guitar heroics of Tremonti and Eric Friedman stole the show; with so much attention on Tremonti himself, Friedman is the band’s immensely talented secret weapon. Highlights from the set included “Flying Monkeys,” with its slow, menacing groove, and a pair of songs from last year’s sci-fi concept record “A Dying Machine” (review)—the title track and the current single, “Throw Them to the Lions.”

TREMONTI SET LIST: “Cauterize,” “You Waste Your Time,” “Another Heart,” “The Things I’ve Seen,” “Flying Monkeys,” “Catching Fire,” “Throw Them to the Lions,” “A Dying Machine,” “Wish You Well”

Much of the audience seemed to not know what to think about Cane Hill. The New Orleans-based quartet didn’t play anything from its experimental, semi-acoustic new EP, “Kill the Sun” (review), but baffled onlookers anyway with a set pulled mostly from its 2018 album, “Too Far Gone” (review). Between songs, frontman Elijah Witt heartily endorsed marijuana, and even that brought only a mild reaction. So when he later talked about the band’s year-long odyssey with LSD, which fueled “Too Far Gone” and “Kill the Sun,” you can imagine the bewildered looks he got in response.

Performing in near darkness, the heaviest band of the night—but not by much if you consider Sevendust’s hardest-hitting material—Cane Hill pummeled the confused crowd anyway. I don’t think the older Sevendust and Tremonti fans were prepared for a band like Cane Hill, which I think made me enjoy the set even more.

A pair of up-and-coming bands sporting big, Southern-influenced riffs seemed to be more this crowd’s speed. Kirra, out of Oklahoma City, got the evening started, followed by Athens, Georgia’s Lullwater, which went over exceptionally well and seems to be building some serious momentum leading up to the Feb. 22 release of its new record, “Voodoo.”

LIVE METAL BEST OF 2019 Jeff Maki (Founder) Exact order TBD. Overkill “The Wings of War” We “felt the fire” when New Jersey thrashers, Overkill “took over” and had us all “Under the Influence” back in the early ’80s. Throughout the ’90s and “The Years of Decay,” not even the band itself could look into its “Horrorscope” and see itself becoming “Immortalis” all the way through to “The Electric Age.” But “The Grinding Wheel” kept thrashing all the way to present day, now prepared to ride on “The Wings of War.” ‘Nuff said. @overkillofficial overkillofficial #overkill #thrashmetal #thrash #bestof2019 #heavymetal #metal #livemetal