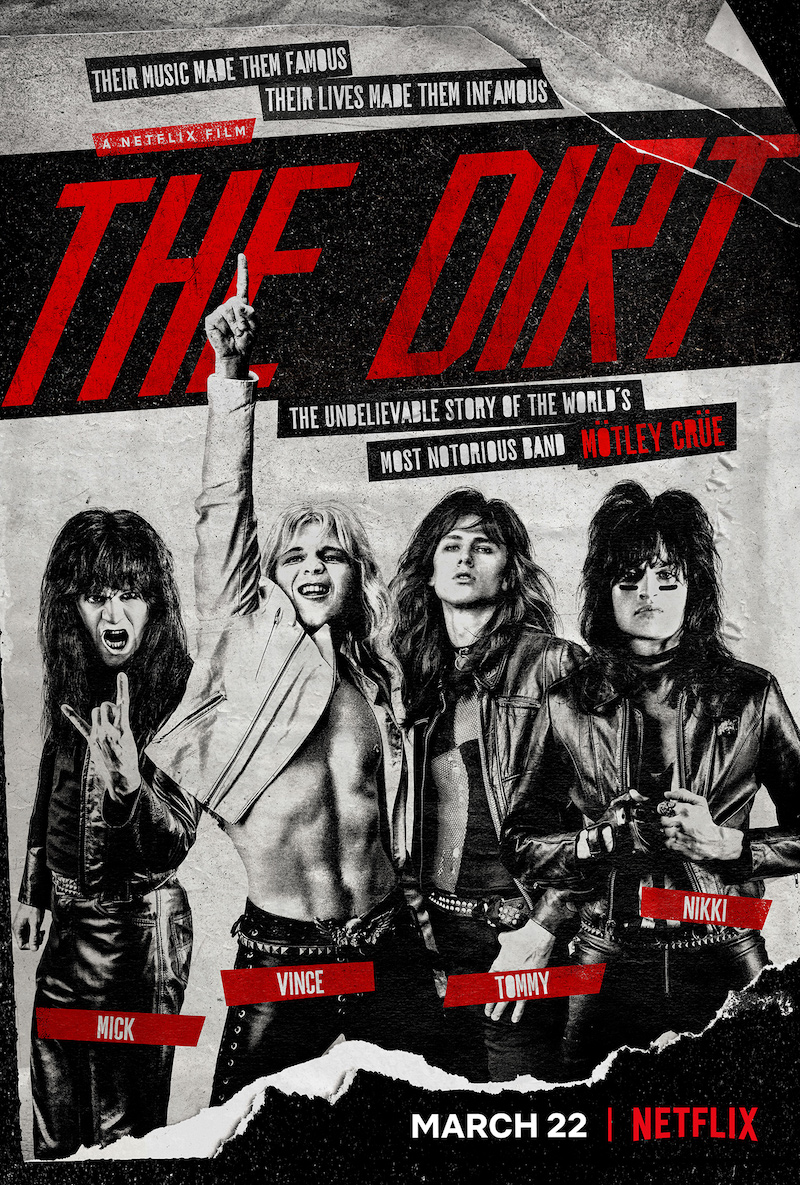 Review by Greg Maki
—–
After years of development at various studios, Netflix finally has brought a film adaptation of Mötley Crüe’s 2001 autobiography, “The Dirt” (co-written by Neil Strauss), to the screen. And much like last year’s Queen biopic, “Bohemian Rhapsody,” it’s just sort of OK. Unlike that Oscar-winning film, “The Dirt,” directed by “Jackass” co-creator Jeff Tremaine, pulls no punches in depicting the sex and drugs in this rock ‘n’ roll tale.

It’s an entertaining way to spend a couple hours, especially since you don’t even have to leave your couch to watch it. Your impression of it will be informed largely by three factors—your opinion of the band’s music (which, of course, fills the movie’s soundtrack), your knowledge of the band’s story and your opinion of the four band members themselves. I am a longtime Crüe fan and know most of the details of their sordid saga, and I’m unsure on the last point. Nikki Sixx, Tommy Lee, Mick Mars and Vince Neil have done some awful things, and gotten away with a lot of it, but there’s also been some good along the way—charitable contributions, raising drug abuse awareness—and their music has been the soundtrack to a large portion of my life.

The bulk of “The Dirt” is set in the 1980s, that infamous decade of debauchery (or, in some people’s eyes, depravity). Written by Amanda Adelson and Rich Wilkes, it copies the book’s strategy of four narrators, beginning with bassist/principal songwriter Sixx (Douglas Booth). Once a boy named Frank Feranna Jr., he abandons that name in response to his father abandoning him and moves to Hollywood with dreams of rock stardom and a stolen bass guitar. There, he meets teenaged drummer Tommy Lee (Colson Baker, aka rapper Machine Gun Kelly). Next, they recruit guitarist Mick Mars (Iwan Rheon), who’s older and suffers from a degenerative bone disease, but his sound is exactly what they’re looking for. Then they find Vince Neil (Daniel Webber), their singer, a friend of Tommy’s, with bleached blonde hair and the stage moves that drive the girls wild.

Mötley Crüe quickly takes over the Hollywood scene, signs with Elektra Records via Tom Zutaut (Pete Davidson), and the crowds get larger and larger, and the sex and drugs become more and more plentiful, especially on a tour with Ozzy Osbourne (Tony Cavalero). Though the band members are having the time of their lives, it’s hard to accuse the movie of glorifying their exploits, which includes treating women as nothing more than objects for their pleasure. To the outsider—i.e. the viewer—they come off as total buffoons, like children experiencing freedom from their parents for the first time (which they essentially were, considering this was the first time any of them made any real money on their own). And the comedown is sudden and tragic.

First, Vince, driving drunk, crashes his car and kills his buddy, Razzle (Max Milner), drummer of the band Hanoi Rocks. After spending just 19 days in jail, his court-mandated plan is to stay sober, which he must do with zero support from his bandmates. Nikki, meanwhile, already is deep in the throes of a heroin addiction that would lead to his infamous overdose a few years later. A distance opens between Vince and the others, and it only widens over time, even during the wildly successful “Dr. Feelgood” world tour, depicted as putting a serious strain on the relationships of all four of them. And if you know what’s coming, every appearance of Vince’s young daughter, Skylar (Kamryn Ragsdale), is beyond heartbreaking.

The movie ends in the mid-’90s, soon after a tearful reconciliation, conveniently leaving out Tommy Lee’s late-’90s incarceration for domestic violence and his exit from the band, eventually leading to a much more successful reunion in the mid-2000s, which “The Dirt” brings forward in time by about a decade.

Tasked with portraying iconic, living figures, the cast has a tough job. Baker, who also appeared in last year’s Netflix sensation,“Bird Box,” is the most successful, capturing Tommy’s near manic energy and youthful enthusiasm, which sometimes boils over into rage that manifests when he punches his girlfriend in the face on the band’s tour bus. My other favorite is Rheon, best known as the villainous Ramsay Bolton on “Game of Thrones,” who gets some of the movie’s best lines as the curmudgeonly Mars. Booth and Webber get the most dramatically rich material, but with so much ground to cover in less than two hours, the movie doesn’t have the luxury of time to develop it adequately; narration frequently drops in, telling instead of showing.

If you’re a Crüe fan like me, though, you’ll revel in the recreation of vintage concert stages and costumes, the earliest rehearsals of the classic “Live Wire” and a visit to the “Looks That Kill” video shoot. Concentrating on the band’s early years, the soundtrack leans heavily on the first two—my favorite—Mötley albums, “Too Fast for Love” and “Shout at the Devil.” (Thankfully, a newly recorded cover of Madonna’s “Like a Virgin” is nowhere to be heard.) It’s just a shame we don’t have the opportunity to see the concert scenes on the big screen, which would bring out the band’s over-the-top, larger-than-life qualities even more.

The four members of Mötley Crüe aren’t perfect, and given their involvement in the development of the film, they clearly recognize that. They don’t come across as particularly likable a lot of the time, and it’s admirable that that they didn’t stand in the way of that depiction. “The Dirt” isn’t perfect either, but it is a wild ride with a band, and through a time, unlike any other.