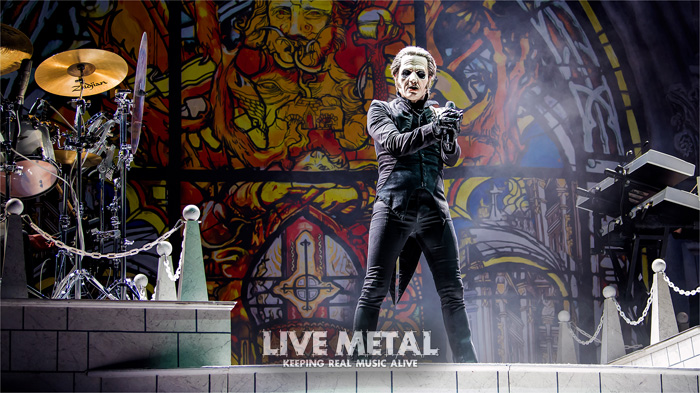 Review and photos by Lizzy Davis
—–
Though Sonic Temple Art + Music Festival technically was a new festival to the scene, having Rock on the Range as a predecessor doesn’t hurt and certainly set the bar high. With clear skies and the sun shining, the largest rock and metal music festival of America set off on the right foot as it came and went all too quickly over the weekend of May 17 to 19 at Mapfre Stadium in Columbus, Ohio.

In defiance of incredibly stormy weather night before, Friday was warm and barely overcast. The Jacks and Radattack officially kicked off Sonic Temple at 12:45 p.m. on the two side stages, Echo and Wave respectively.

While Australian rock band Hands Like Houses played the Wave Stage, SHVPES kept the Echo Stage going. The U.K. band has been gaining traction with its latest single, “Undertones,” and frontman Griffin Dickinson pulled some of the first crowd surfers of the day when he told everyone to “Give the security guys something to do!”

Badflower broke into the festival scene in 2017, but with the February release of its debut studio album “OK, I’m Sick,” and two chart-topping singles now under its belt, a massive crowd had gathered at the Monster Energy-sponsored Main Stage to show their support. Vocalist Josh Katz acknowledge the sizeable crowd with a smile, saying, “Looks like there’s a few people out there familiar with us.”

Midway through Badflower’s set, Katz visibly couldn’t contain his excitement as he took to the mic to say, “I’m not sure I’m supposed to say this yet, but I just found out this is the number one rock song in the country right now.” With a sheepish grin, he added, “I’m definitely going to get in trouble for saying that.” The band went on to play “Heroin,” its second (officially) chart-topping single. The highlight of Badflower’s set, however, always is the emotionally charged performance of “Ghost,” the lead single from the new album. The crowd gave an equally emotional response, with a huge round of applause and roaring cheers.

Wage War played a surprisingly early time slot on the Echo Stage but pulled a notable crowd that got riled up for its metalcore tunes. The band opened with “Don’t Let Me Fade Away” and followed with its latest single, “Low.” By the time it closed with “Stitch,” fists were pumping and people were throwing rolls of toilet paper over the crowd.

Whenever Avatar plays a festival, people get excited and aren’t shy about showing their support. Sonic Temple was no exception, and there even were fans walking around dressed up in costumes and face paint like vocalist Johannes Eckerstrom sports on stage. The Swedish band has nailed its characters, heralding lead guitarist Jonas “Kungen” Jarlsby as “The King,” while Eckerstrom leads the rest of the metal circus. The band never fails to leave an impression with guttural music accompanied by their carnival-like theatrics.

Zeal & Ardor delivered one of the most unique performances in terms of sound during the weekend. The band comprises a fairly standard five members, but three of the five provided vocals. Their voices harmonized perfectly, making for a well-delivered, melodic metal set.

Columbus is home to Beartooth, so it wasn’t surprising that the band pulled a big hometown crowd. Unfortunately, there seemed to be a small technical issue that was causing the timing of vocalist Caleb Shomo to be a few seconds off from the rest of the band. Fans seemed pretty undeterred by the technicality and showed plenty of support in the form of headbanging and crowd surfing, and eventually the kink was worked out later in the set.

Bad Wolves were a unique act to the Sonic Temple lineup, being its only festival appearance of the month. The Los Angeles supergroup has been together barely for three years but quickly caught the world’s attention with their cover of The Cranberries’ “Zombie.” Bad Wolves managed to pack seven songs from its 2018 debut studio album, “Disobey,” into its 30-minute set, which concluded with the well-known cover.

Day one was passing quickly and the sun was blazing over a packed stadium by the time Parkway Drive hit the stage just before 6 p.m. The Australian metalcore band has a massive fanbase in the United States, and there was no shortage of them in attendance. From opening with “Wishing Wells” to closing with “Bottom Feeder,” it was no surprise that it pulled one of the most hardcore sets of the weekend.

Tom Morello’s follow-up may not have been quite as heavy, but fans enjoyed an impressive medley of familiar songs from “Bulls on Parade” to “Cochise.” The set was highlighted by a guest performance from Serj Tankian (System of a Down vocalist) for a tribute to Chris Cornell. The performance of “Like a Stone” came as a surprise to most, and many missed out as they were occupied at the opposite stage for a set from guitar god Zakk Wylde and Black Label Society.

Lzzy Hale has become one of the most iconic frontwomen in modern rock, and her vocal talent was on full display during Halestorm’s set. The band played numerous hit singles, including “Freak Like Me” and “I Miss the Misery,” but the fan favorite moment turned out to not be a song at all. Earlier in the day, Halestorm met a young fan named Karissa during a meet-and-greet session. During Halestorm’s set, Lzzy announced they’d found the coolest Halestorm fan at the entire festival and invited Karissa out on stage to introduce her. As if the moment wasn’t already one to remember, Lzzy turned to Karissa and said, “I want to tell you something, Karissa. I have a lot of these,” gesturing to her signature guitar. She continued, “I think you should have this. Karissa, thanks so much for being a fan.”  Lzzy gave the girl a kiss on the cheek and, naturally, had half the crowd in tears, moved by the kind gesture.

Swedish extreme metal band Meshuggah turned emotion back into raw metal as it followed, closing the Echo Stage. Meshuggah was labelled one of the 10 most important hard rock and heavy metal bands by Rolling Stone and has amassed somewhat of a cult following, some of which had gathered at the barricade. Meshuggah performed with an innovative and complex song structure, resulting in face-melting metal.

The sun finally had gone down and a full moon rose over Mapfre Stadium, setting an eerily perfect scene for Swedish rock band Ghost. The main stage was adorned with an intricate stage setup featuring a massive, cathedral-like backdrop. Ghost’s set included its recent Grammy-nominated song “Rats,” as well as “Cirice,” the song that won the Grammy Award for Best Metal Performance in 2016. The band has a one-of-a-kind performance that nearly everyone can appreciate in a live setting, even if they aren’t necessarily fans of the music.

The stage then transformed one final time for the day into something slightly less extravagant but still dazzling, with a light-up diamond backdrop that transformed into 3D mirrors. System of a Down opened with “Innervision” and had the whole crowd singing along by the third song of “I-E-A-I-A-I-O.” Unfortunately, at the beginning of the fourth song, vocalist Serj Tankian calmly announced, “The sound people have to reboot the sound system.” Within moments, a huge chant of “Fuck the system!” erupted through the crowd. The chant continued for nearly five minutes, accompanied by impatience stomps on the riser until Serj returned and asked, “Can you guys hear this?” The thunderous cheer that erupted was the only answer needed.

System of a Down went on to play “B.Y.O.B.,” “Aerials,” “Chop Suey!” and countless other hits spanning its five album discography sans any further hiccups. After an impressive 25 songs, night one of Sonic Temple concluded on the notes of “Toxicity” and “Sugar.”