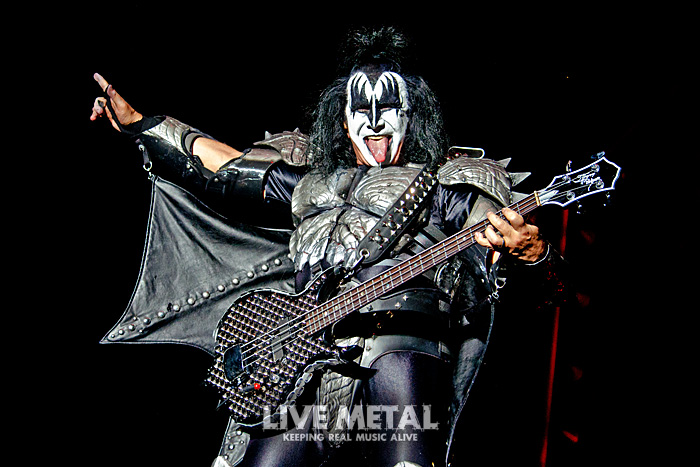 LIVE PHOTO GALLERY
—–
Review by Greg Maki
—–
Not to be confused with its “farewell tour” of 2000, KISS brought its “End of the Road World Tour” to Hersheypark Stadium and said goodbye to the region as only the “hottest band in the world” can.

Forty-six years after forming in New York City, KISS filled a hot, humid night with flames and fireworks, explosions and rockets, blood and confetti in a two-hour-plus show. As always, the band spared no expense when it came to production, with the aforementioned pyrotechnics, rising platforms and a huge video screen.

Ever since putting the makeup back on for its massive reunion tour in 1996, KISS gradually has reintroduced songs from its less celebrated later eras to the live shows, to the point where it now is playing a true career-spanning set list. That means the classic “Deuce,” from the self-titled debut album (1974), was followed by “Say Yeah,” from 2009’s “Sonic Boom,” which then led into a trip through the early ’80s with “I Love It Loud,” “Heaven’s on Fire,” “War Machine” and “Lick It Up.” Later, we heard “Psycho Circus,” from the 1998 record of the same name, and “Crazy Crazy Nights” off the 1987 album.

The band—vocalist/rhythm guitarist Paul Stanley, vocalist/bassist Gene Simmons, and lead guitarist Tommy Thayer and drummer Eric Singer, appearing in the “spaceman” and “catman” makeup of original members Ace Frehley and Peter Criss, respectively—transitioned smoothly between eras and sounded as strong as ever. That and, of course, the bombastic stage show helped cover for Stanley and, to a lesser extent, Simmons, who no longer are in top shape vocally. (Who is when they reach their late 60s?)

With the band allegedly hanging it up for good at the end of this tour, it was a bittersweet occasion. KISS clearly remains a top draw on the concert circuit — 20,000 people attended this show — and still puts on a show that’s an unparalleled spectacle. But after nearly half a century of smearing their faces with paint, stalking stages in platform boots, spitting blood and entertaining legions around the world, they’ve earned the right to go out on their own terms. That’s exactly what they’re doing, and the KISS Army of Hershey was out in force to watch its heroes ride off into the night.